•        Reviewed the performance of Punjab Youth Development Board

•        Board members tasked to channelize defunct youth clubs of the state

Punjab Sports and Youth Services Minister Rana Gurmeet Singh Sodhi, on Friday, announced that the Punjab hockey players participating in the Tokyo Olympics would now get Rs 2.25 crore individually on winning a team gold medal in these coveted games. Earlier, an amount of Rs 2.25 crore was given to the entire team for winning a gold medal.

Addressing the media after presiding over a meeting of Youth Development Board at Punjab Bhawan here, Rana Sodhi said that out of total 20 players from Punjab, 11 players are giving their best in the Indian hockey team competing in Tokyo Olympics. Congratulating the players on their excellent performance, he expressed hope that we are going to win 3 to 4 medals in the Olympics.

Reviewing the performance of the Punjab Youth Development Board, Rana Sodhi directed the Director Sports & Youth Services to issue letters to all the Deputy Commissioners of the state to maintain the dignity of all the office bearers of the Board and invite them to the official district-level function, besides initiating action to include board members in the District Grievance Redressal Committees. He was accompanied by the Chairman of the board Mr. Sukhwinder Singh Binda and Director Sports Mr. D.P.S. Kharbanda.

The Cabinet Minister also entrusted the office bearers and members of the board with the responsibility of channelizing defunct youth clubs in villages and urban areas, saying that they should visit villages and establish one to one contact with the people especially youngsters so that the grievances of the people could be addressed at the earliest. The Minister said that review of their performance in this regard will be gauged in next monthly meeting.

Rana Sodhi also discussed some important issue at length and width such as distribution of sports kits to youngsters to promote sports culture and health awareness, future plans of stadiums in the state, involvement of youth directly with board through Social Media, bestowing appreciation certificates to corona warriors for relentless their services during COVID times etc.

Highlighting the works done by the Punjab Youth Development Board during COVID times, Mr. Bindra apprised that board has launched COVID Helpline for Youth (95772-00003) besides distributing more than 2500 Certified PPE Kits and insurance worth Rs.25 lacs to Corona Warriors and installed three Gas Crematorium in Sahnewal with the cost of Rs.25 lacs approximately through CSR Funds. He said that office bearers of the board are continuously motivating industrial giants to contribute under their cultural-social responsibility. He said that through CSR Funds, the board is distributing more than 2500 Sports Kits worth around Rs.1 Crore, while up-gradation of 5 play grounds with Rs.1 crore in villages of Sahnewal is underway. He said that the board so far organized 300 free vaccination camps for Youth of Punjab besides spreading the message of 'Mission Fateh' all over State, while fee of more than 9000 Students was waived off during pandemic times. The board has also helped students to return back home, who were held-back in other states due to lockdown. He said that more than 3 lac youngsters are directly connected directly with the board through Social Media. Mr. Bindra informed that the board is also involving youngsters of the state in Chief Minister Captain Amarinder Singh's ambitious projects 'Mission Tandrust Punjab, 'Mission Fateh' and for 'COVID Vaccination Camp under Mission Fateh-2'.

CHARANJIT SINGH CHANNI SWORN IN AS CHIEF MINISTER OF PUNJAB

SIPR AND CIPR HAND OVER NEW VEHICLES TO PR OFFICERS 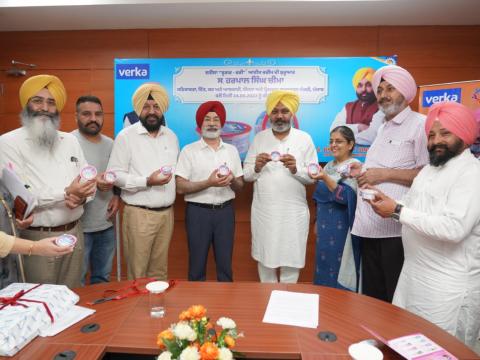 COOPERATION MINISTER HANDS OVER LETTER OF AWARD TO CONCERNED COMPANY

PUNJAB MANDI BOARD GETS NATIONAL PSU AWARD 2020 FOR QVIC APP

PCS Association's delegation handing over a check of Rs. 11.29 Lakh to the Principal Secretary to CM Tejveer Singh.

CAPT AMARINDER LEADS BAISAKHI PRAYERS WITH OWN ARDAS AT 11, THANKS PEOPLE FOR STAYING IN